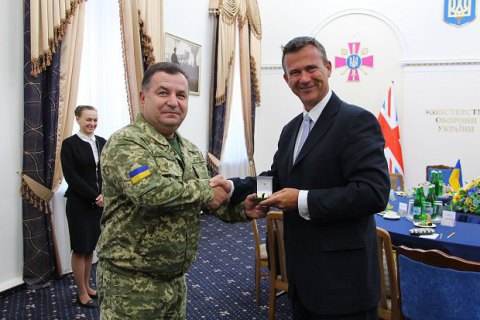 Ukraine remains in the zone of attention of European nations and feels their support.The Minister of Defence of Ukraine Stepan Poltorak on 31 August in Kyiv met with the UK Minister of State for the Armed Forces, Mark Lancaster, the press service of the Ministry of Defence informs. Poltorak thanked Lancaster for the participation of the British military in the celebration of the Independence Day of Ukraine.

"The British military showed good preparation and a high level of responsibility for the parade. The participation of 11 foreign delegations in the celebration of the Independence Day of Ukraine was a powerful signal that Ukraine remains in the zone of attention of European states and feels support from them," the Ukrainian defence minister said.

Poltorak told the UK delegation about the situation in the ATO zone and the preliminary results of the reform the ministry and the armed forces of Ukraine.

The defense chief praised the level of training of Ukrainian military instructors under the UK Orbital training programs, noting that the foreign expertise has helped boosting the combat effectiveness of Ukrainian armed forces.

Poltorak also noted the high level of cooperation between Ukraine and Great Britain in the military sphere and called the involvement of British instructors in the preparation of units, staffs and military command and control bodies of the ATO one of the possible ways to expand it.

He stressed that the latest changes in the activities of the defence ministry have become possible, among other things, thanks to the assistance of British advisers.

On 24 August, the defence ministers of Ukraine and the United States held talks in Kyiv and discussed the situation in Donbas and the expansion of American aid.