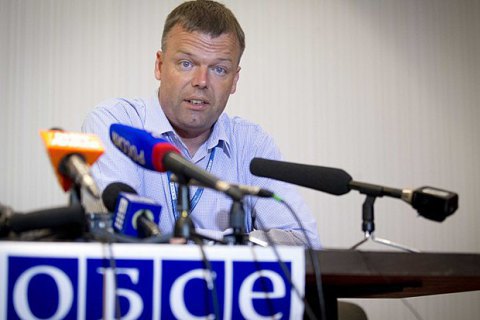 The OSCE Special Monitoring Mission has said that the intensity of shelling in Donbas suggests that neither party has been observing the so-called "school" armistice, announced on 25 August.

Principal Deputy Chief Monitor of the Special Monitoring Mission in Ukraine, Alexander Hug, told a briefing on 1 September that on the first day of the truce, the number of violations dropped by more than half compared with the previous day – from 654 to just over 300.

On the next day, Saturday, 26 August, the number of firing incidents dropped to 47. Hug said he believed that such a pause suggests that the parties can stop shelling if they want.

However, since Sunday, the number of violations of the ceasefire regime, reported by the monitors, has started to grow again. On Sunday, there were 151 violations, on Monday 173, on Tuesday 431, and on Wednesday 186.

"Statements to the whole world about the restoration of obligations to observe the cease-fire regime must be accompanied by appropriate actions," Hug complained.

On August 25, on the first day of a new truce, three soldiers were wounded. On Aug. 26–31, the ATO did not suffer any losses.

The Contact Group held a videoconference on August 31, during which the Ukrainian side called for doing everything to ensure that the ceasefire regime was observed from September 1.