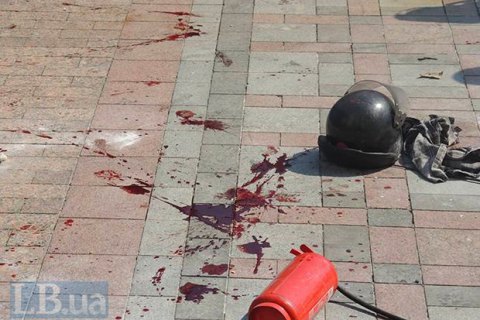 The investigation has found no proof of the nationalist Freedom party's involvement in the murderous terrorist act at a rally outside the parliament on 31 August 2015, MP Anton Herashchenko has said.

"Unfortunately, the investigation failed to determine who has indoctrinated those guys. They refused to confess and get the burden off their chest," Herashchenko, who is also an adviser to the interior minister, said, as quoted by Interfax-Ukraine.

The law enforcers have suspected Freedom's leaders of involvement in the organization of the terrorist act. "This version, however, found no confirmation, although the party's leader Oleh Tyahnybok visited the volunteer battalion where the young man who threw the grenade served days before these events. It turned out to be a coincidence," the MP said.

The verdict in the case of two young people, one of whom threw a grenade into the crowd during the protest rally opposite the parliament building while the other covered him, is expected in October-November, Herashchenko said.

In another case, 10 people, including a number of former Freedom MPs, are suspected of instigating riots and violence against law-enforcement officers during the protest rally.

"Unlike his companions, Tyahnybok was smart and has never directly called [during the rally] for attacks on the riot police. His party fellows did, however," Herashchenko said.

On 31 August 2015, the Ukrainian parliament with 265 votes approved in the first reading the presidential bill amending the country's constitution with regard to decentralization of power.

In response, a few nationalist parties, including Freedom, called a protest rally opposite the parliament building. Upon learning about the approval of the bill, protesters clashed with the riot police. In the heat of the rally, Ihor Humenyuk, a member of the volunteer battalion Sich and a Freedom sympathizer, threw a combat grenade into the riot police ranks. The explosion killed four National Guard servicemen and left over 130 law-enforcement officers wounded.

Humenyuk was detained in hot pursuit. Later the same day, police detained his friend, a member of the volunteer battalion Carpathian Sich, Serhiy Kraynyak. Police videos showed that Kraynyak lit a smoke bomb to help Humenyuk escape. Humenyuk and Kraynyak were arrested and charged with the terrorist act.

A few more persons have been detained on suspicion of organizing the riots, but most of them were eventually bailed out. In late May 2016, the National Police completed the investigation into the 31 August riots, which involved 15 suspects, including several former Freedom MPs.

Freedom failed to make it to parliament in the last election.