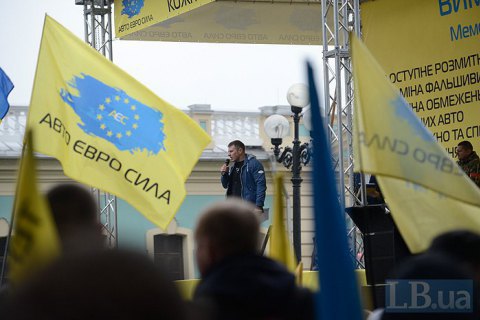 Ukrainian owners of non-cleared imported cars, who are rallying in the center of Kyiv, signed a memorandum of understanding with Nina Yuzhanina, chairman of the Verkhovna Rada Committee and Customs Policy. Yuzhanina said on Espresso.TV Friday that memorandum contains obligations for both protesters and the government.

"We have pledged that the parliament will consider and adopt the bill at the next plenary week. It would envisage a total closure of borders for the import of cars based on the illegal use of temporary or transit regime," the people's deputy stated.

The second part of the memorandum, she said, provides for the adoption of a bill, according to which cars already imported to Ukraine can be duly registered and cleared upon the payment of all customs charges established by the state.

Under the memorandum, the government pledges to exempt motorists that have used the temporary import loophole from further prosecution. According to Yuzhanina, the transit to Ukrainian registration plates will cost the actual Ukrainian owners of non-cleared cars the equivalent of 1,000 to 1,400 euros in customs clearance and registration duties.

"It is quite an affordable amount. In the category of up to 2200 cu cm [of engine displacement it is in the area of 1 thousand euros. For the next category is 1,2–1,4 thousand euros," she said.

Yuzhanina said that this regulation will concern cars with foreign registration manufactured both after 2010 and 2000. Corresponding changes will be made to the tax, customs and budget codes.

In the meantime, Eldar Salimov, a coordinator of motorists' rallies, announced on Facebook about the termination of the protests.

"The Verkhovna Rada has proposed a number of concessions regarding our demands. The active phase of the rally "For an affordable customs clearance" has been discontinued. We getting down to working out the provisions of the new bill," he said.

He warned, however, that protests could resumed if the cooperation with the legislative and executive authorities does not bring the expected results.