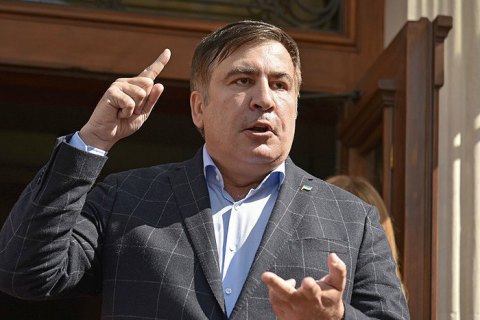 Leader of political party the Movement of New Forces, Mykheil Saakashvili, announced plans to hold a political rally in Kyiv on 17 October, but said it will not grow into a third Maydan.

Speaking at a briefing in Kyiv on 13 October, he said the rally will demand creation of anti-corruption court, the removal of deputy immunity, and the adoption of a new electoral legislation.

Saakashvili avoided to prognosticate on the expected number of participants in the rally, and said he did not believe that the event may face any pressure on behalf of the authorities.

"Ukraine does not need a third Maidan because, firstly, the Second Maidan is not over yet. Secondly, the law enforcement agencies that we are having today will never shoot at the people," Saakashvili said.

The rally may be extended indefinitely if the government ignores demands of protesters, he warned.

A number of parties and political forces have announced plans to stage political protests in Kyiv on 17 October, including Self-Help, Freedom, Civil Position, Alternative, Democratic Alliance, and National Corpus.

Organizations Honestly, the Reanimation Package of Reforms, the movement Khvylya and others have stated in support of the future rally.

Among the key demands will be changing Ukraine's electoral system toward a proportional system with open party lists and limited political advertising on television, the creation of anti-corruption Court, and cancellation of immunity of people's deputies.