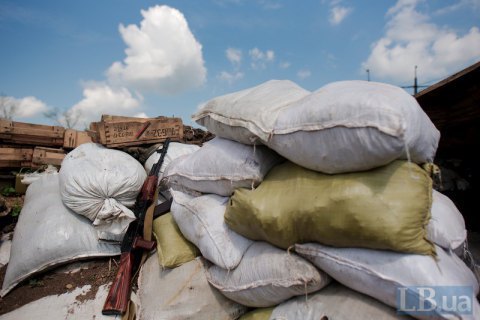 The enemy concentrated fire activity in the Donetsk sector, using mortars and the whole range of infantry weapons, ATO headquarters reported on 13 October.

In this sector, Russia-backed separatists for a few hours in the evening fired grenade launchers, heavy machine guns and small arms at Ukrainian positions in Avdiyivka industrial zone. The enemy released around six 82-mm mines at the defenders of Verkhnyotoretske. In addition, the militants used IFV weapons and machine guns opposite Luhanske, and fired small arms nearby Kamyanka at night.

In the coastal sector, the pro-Russian militants twice shelled the defenders of Vodiane from heavy machine guns and an automatic grenade launcher, and fired a machine-gun fire at the ATO positions near Starohnativka. An enemy anti-tank grenade launcher hit shelled Pavlopil.

It was relatively quiet in the Luhansk sector in the evening with the exception of Novooleksandrivka that was fired from a machine gun.

Over the past day, the militants 41 times violated the regime of silence in the area of the anti-terrorist operation in Donbas. ATO forces 28 times fired back.