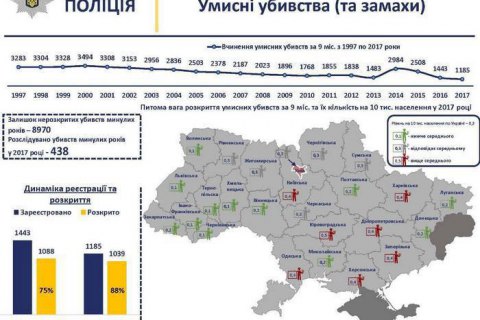 In the period of January to September this year, 1,185 premeditated murders were committed in Ukraine, an almost 20% decrease over the same period last year. At the same time, their disclosure improved 75% to 88%, the first deputy head of the National Police, Vyacheslav Abroskin, reported on Facebook Sunday. "Over the past nine months, we have recorded 1,185 cases of premeditated and attempted murders. This is the lowest figure in the last ten years. Meanwhile, the rate of disclosure of such crimes is at 88%, taking into account the previous years," he said.

In May, Prosecutor-General Yuriy Lutsenko speaking in the Verkhovna Rada described the crime rate in Ukraine as "very difficult" but said it showed signs of improvement in the first quarter.