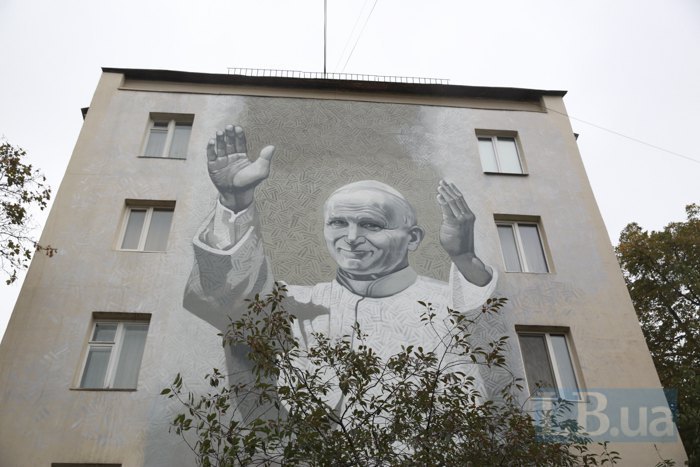 Photo: Photo: Serhiy Nuzhnenko
On Sunday, 15 October, a street in Kyiv's Pechersk district with a mural with his image was renamed after John Street Pavlo II (formerly Patrice Lumumba).

The grand opening ceremony was attended by members of the Polish parliament, Polish ambassador to Kyiv, and representatives of the Vatican.

"His Holiness Pope Francis turns his sincere greetings, expressing his recognition of this praiseworthy initiative and wanting the clear examples and unforgettable teaching of the Pontiff encouraged people to follow with joy by the Christian witness and service to others," the Secretary of State of His Holiness, Italian Cardinal Pietro Parolini said at the grand opening ceremony.

Polish Ambassador Jan Pjeklo said that the Pontiff made an important part in the development of post-Soviet countries after the collapse of the USSR.

"Moscow does not want Ukraine to be part of a common European space, the space of peace and well-being. It is very important that the Pope was aware of this and came to Ukraine for that. We need to promote this space toward the eastern border of Ukraine," the ambassador said.

Shortly before the opening, the John Pavlo II mural has been vandalized. Unidentified perpetrators painted swastikas at the bottom of the mural and wrote, in particular, in Polish "Polish dog's blood" and in Russian "Take this monster away," and "The Union shall not pass," the latter with a reference to the Union of Brest, an agreement in 1596 that united several million Ukrainian and Belorussian Orthodox Christians with the Roman Catholic Church.

Kyiv зщдшсу is investigating into the accident.