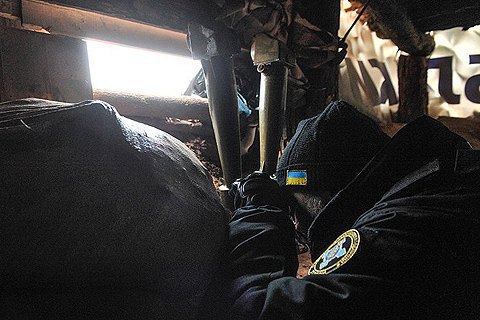 Over the past day, one Ukrainian soldier was killed and two were wounded as a result of enemy shelling in Donbas. The militants 27 times breached the ceasefire agreement during the day. Ukrainian servicemen on 11 occasions returned fire, the antiterrorist operation (ATO) headquarters said in its Wednesday report.

In the Luhansk sector, the enemy continued to provoke the Ukrainian military on the Svitlodarsk salient. In the evening, the enemy fired on the defenders of Zaytseve, Novoluhanske and Mayske, mostly from infantry weapons.

In this area, militants fired mortars, rocket-propelled grenades, small arms and IFV weapons at the ATO fortifications between the settlements of Zaytseve and Hladosove. These provocations by illegal armed groups disrupted the visit by OSCE SMM monitors and representatives of the UN mission, which planned to monitor the humanitarian situation in Mayske and Hladosove.

"These armed provocations by Russian mercenaries are aimed at discrediting the Armed Forces of Ukraine in the eyes of the world to blame ATO forces for an allegedly precarious humanitarian situation in these settlements. The ATO headquarters report that a temporary civil and military humanitarian centre has been set up to improve the supply of potable water and power to the local civilian population," the ATO HQ said.

Also in the Luhansk sector, militants fired mortars at ATO troops stationed on the outskirts of Tryokhizbenka and rocket-propelled grenades and small arms at the fortifications in Zhovte, Novooleksandrivka and Katerynivka.

In the Donetsk sector, an enemy sniper for several hours fired at the positions of the ATO forces in the suburbs of Avdiyivka. A Ukrainian soldier was shot dead by a sniper in the area. Berezove came under fire from infantry weapons.

In the Azov Sea coastal area, the enemy pounded Hnutove and Vodyane with grenade launchers and small arms, and fired IFV weapons on the outskirts of Shyrokyne.

Last week the ATO HQ confirmed that the villages Travneve and Hladosove, which used to be in the grey area", moved under the control of the Ukrainian army.