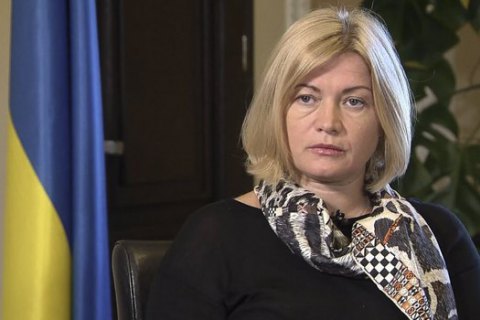 On Monday, 18 December, the humanitarian subgroup of the Tripartite Contact Group on Donbas settlement discussed via a Skype conference the release of prisoners held by both parties.

The Ukrainian representative at the talks Iryna Herashchenko said that Ukraine has confirmed preparedness to hold the exchange before the New Year and Christmas holidays.

"At the same time, the representatives of "D/LPR" last week filed additional list of persons to Minsk Group with the requirement to include these people in the approved exchange list, which seriously complicates the definition of the date of exchange and, in fact, amounts to a breakdown of the entire exchange process," Herashchenko wrote in Facebook.

The parties also failed to resolve the problem with the verification of people in Ukraine who just recently stated the refusal to be transferred to the occupied territories.

"Meanwhile, "D/LPR", in actual fact insist that the Ukrainian side should extradite free people across the contact line. The Russian Federation also said that the exchange will not take place unless we pull all 306 people across the contact line, including those already released and who do not want to be moved to Pax Russia, who have signed relevant statements and whose lawyers accordingly appealed to us with the demand not to violate human rights," Herashchenko wrote.

She says Ukraine expects that the OSCE to confirm its position that it is impossible to force those released from custody to move to the "DPR" and "LPR". In her opinion, such a statement would speed up the determination of the final date for the exchange of prisoners.

Ukrainian side suggested to finally agree via a Skype conference on 20 December on the final details.

In recent days, Ukrainian courts have released a number of separatists from custody for exchange.