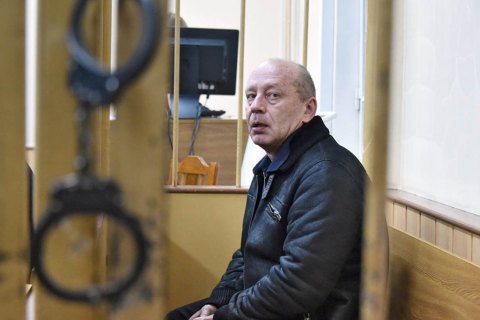 An expert with the Federal Information Centre Analysis and Security (FICAS), Sergey Sokolov, who was detained by the Russian Federal Security Service (FSB) in Moscow a day earlier, was involved in an attempt to stage a number of terror acts in Russia with the involvement former participants in the Donbas antiterrorist operation (ATO), Security Service of Ukraine (SBU) chief Vasyl Hrytsak has said. These provocations were to result in Russia's incursion in Ukraine, he added.

Apart from Sokolov, the FSB also detained FICAS head Rusla Milchenko and others.

"I would like to remind you that in August 2017, the SBU made public some specific facts confirming that the mentioned persons, including Sokolov, were involved in a cynical provocation of the Russian special services to stage a number of terror acts in Russia at critical infrastructure facilities in Moscow, Kurchatov, Toliatti and Kursk with the involvement of Ukrainian nationals who took part in the ATO. The statements made by the direct participants in these events and material evidence give us all the reasons to believe that this special operation of the Russian special services could have been used as a reason for an open armed incursion in Ukraine by the Russian Armed Forces. In fact, these events mirror those of 1999 when the explosions of residential houses in Moscow, which were organized by the FSB, were used as a reason to start a new military campaign in Chechnya," Hrytsak was quoted as saying on the SBU website.

The SBU suggested that the FSB command was forced to detain Sokolov to minimize reputational losses and distance itself from FICAS, Milchenko, Sokolov and other persons involved. According to Hrytsak, Sokolov was getting out of control of the Russian special services.

"According to operative information available to the SBU, recently Sokolov has been actively looking for an opportunity to go to one of the EU countries to make public the details of the cynical provocations by the Russian special services, in which he has been directly involved for several years," Hrytsak said.

He added that an investigation into the attempts to stage terror acts in Russia had been finalised and would be sent to court.

"SBU investigators and operatives have collected enough evidence to prove that the provocation was planned and directed by the Russian special services. We have identified specific employees who oversaw Sokolov's actions, including a close relative of one of the members of the Russian Federation Council committee for defence and security," Hrytsak said.

The FSB detained a former head of security for late businessman Boris Berezovskiy, Sergey Sokolov, the director-general of the Analysis and Security company, Ruslan Milchenko, and Oleg Antoshin, a former head of security at Toliattiazot, a day earlier. Investigators accused them of illegal purchase, distribution and storage of firearms and explosives. All of them were arrested.