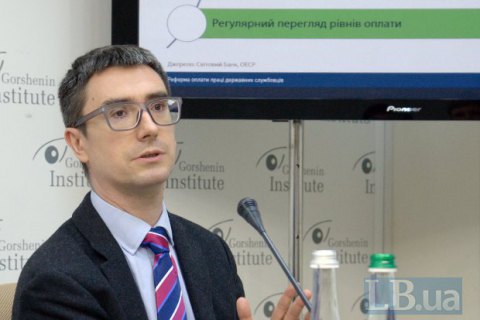 The salaries of the holders of decision-making positions in the civil service are significantly lowers than in the private sector, executive director of the Center for Economic Strategy, Hlib Vyshlinskyy, said at a round table conference at Gorshenin Institute on Friday, 26 January.

A study by the Center for Economic Strategies compared the salaries of public and private sector employees and found that the biggest salary gap was found in the management link.

"A state secretary who won in a job contest has managerial experience in the private sector but no experience in the civil service. Under the old system, his salary could be at the level of 17 thousand hryvnia, without any additional payments. But the same state secretary but with work experience of over 20 years would be entitled to a salary in the area of 50 thousand hryvnia. Such gaps suggest how difficult it is for the civil service to attract the best people from the private sector," said Vyshlinskyy.

"For this new secretary of state, the overall level of remuneration could be at the level of a leading specialist in a state agency that is entitled to maximum benefits and long enough service record. Such a specialist can earn around 50 thousand hryvnya. A man without special skills is paid more than a state secretary responsible for hundreds of civil servants in the ministry simply because he has been holding to the seat of chief specialist for 17 years," added Vyshlinskyy.

According to the expert, 71% of employees in senior positions have the seniority of more than 10 years, which means a 30% bonus to the salary, of these people 46% boast over 15 years of seniority, which gives the bonus of 50%.

The study found that salaries are not properly calculated during a promotion.

"When a chief specialist moves to a managerial position which involves financial, and often criminal liability, the increase in salary is not sufficient enough to motivate people to move on. An optimal salary gap for specialists of different levels should be 15 - 20% instead of 3 - 5 % as is the case now,"– said Vyshlinskyy.