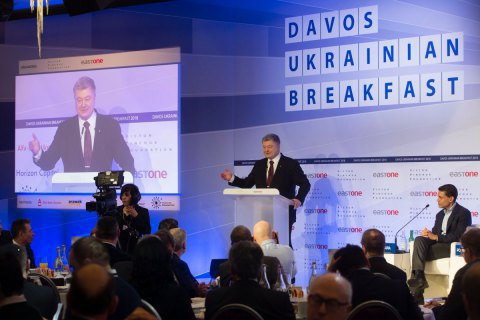 Work is under way with the participation of international partners of Ukraine to amend the presidential bill on the higher anti-corruption court, President Petro Poroshenko said in Davos, Switzerland, on 24 January.

"We will continue to cooperate with the IMF, I want to thank [IMF First Deputy Managing Director] David Lipton and [IMF Managing Director] Christine Lagarde. Yesterday, we had a very important meeting and set a clear timeline on what and when has to be done. That's including the progress in the creation of the anti-corruption court. I have already filed the relevant initiative to parliament and we will accelerate the process to prepare the bill for the second reading," Interfax-Ukraine quoted Poroshenko as saying at the Ukrainian Breakfast in Davos.

Previously, the representative of the president in the parliament, MP Iryna Lutsenko, said that the anticorruption court bill will be amended after the first reading in the Verkhovna Rada. The amendments will take into account the recommendations of the Venice Commission and the International Monetary Fund (IMF). According to optimistic forecasts, the court will be able to start working in six months.

The IMF said that they expect the bill on the anti-corruption court and the law on pension reform are corrected during the preparation for the second reading. The Fund noted that the creation of the Anti-Corruption Court is one of the key requirements of the program of cooperation between Ukraine and the IMF.