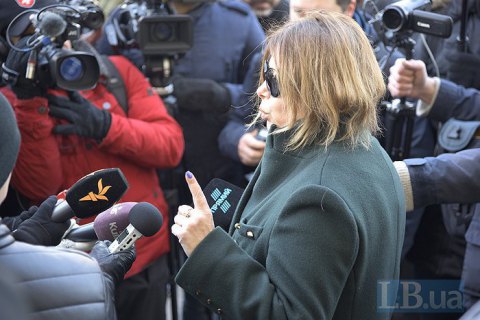 About 30 people on Wednesday, 24 January, picketed the office of the TV channel ZIK in Kyiv. They told an LB.ua correspondent that they were outraged by the invitation of the former first deputy head of Yanukovych's administration, Andriy Portnov on the ZIK air.

The ex-official, who is wanted and, according to him, legally resides in Austria, gave an interview on 22 January to a ZIK's talk show hosted by journalist Natalya Vlashchenko.

Portnov is one of the most odious officials of Yanukovych times, and the air of the program coincided with the anniversary of the death of the first heroes of the Heavenly Hundred, Serhiy Nihoyan and Mykhailo Zhiznevsky.

The invitation of Portnov stirred a public outcry. Vlashchenko began to receive threats, the channel said.

A few days prior, media reported that ZIK fired journalist Roxana Runo. She quit as she refused to follow the orders of the channel's management and exaggerate the merits of Viktor Medvedchuk, in particular, his allegedly central role in the release of Ukrainian hostages from Donbas captivity.

TV channel ZIK is owned by Petro Dyminskyy, a Lviv businessman, who fled Ukraine after committing a lethal road accident.