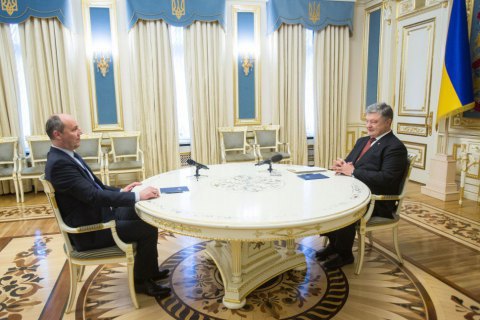 President Petro Poroshenko during a meeting with Speaker of the Verkhovna Rada, Andriy Parubiy, on Tuesday, 23 January, signed a proposal on the appointment of new members of the Central Electoral Commission, as reported on the president's website.

Poroshenko also ordered the dismissal of CEC members in connection with the end of their term of office.

"Now we are launching the process of updating the composition of the CEC," Poroshenko said and reminded that parliamentary factions have actively discussed this issue, but the nomination process was delayed.

"I'm glad that finally all factions have finally nominated candidates that meet all the criteria. I included them in my nomination letter," the president said. He recalled about importance of updating the CEC composition.

Parubiy, in his turn, called hailed nomination of the CEC members by the president as a positive fact.

"I will urgently instruct the CEC candidate members to apply for a special check. I must remind that according to the legislation that [the checkup] may take up to 15 days, ie by the start of the new parliamentary session," Parubiy said. He also added that he would instruct the relevant committee to "immediately consider" this issue.

The terms in office for all members of the CEC ended on 1 June, 2014, but they continue to fulfil their duties. In the summer of 2016, Poroshenko asked the Rada to dismiss 12 CEC members and appoint 11 new members, the parliament never considered the move as the coalition argued that the proposed candidates will not gain enough votes in the session hall.

Under the Constitution, the Verkhovna Rada appoints and dismisses members of the CEC on the proposal of the president.