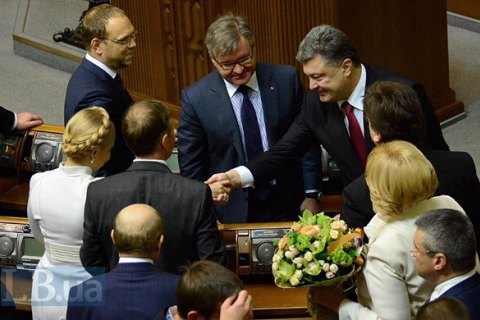 The leader of the Fatherland party Yuliya Tymoshenko and President Petro Poroshenko remained the most popular politicians in Ukraine with the next presidential election to be held in slightly more than a year.

The results of a joint poll held in mid-December by the Democratic Initiatives Foundation and the Razumkov Center with the financial support of the Embassy of the Netherlands indicate that 12.1% of respondents would vote for Tymoshenko in the next presidential race.

The poll found that 10.2% of respondents would support the incumbent President Poroshenko, the leader of the Civil Position Anatoliy Hrytsenko garnered the support of 7.8%.

The top three was followed by the leader of For Life party, Vadym Rabynovych (7.7%), the leader of the Radical Party, Oleh Lyashko (6%), co-chairman of the Opposition Bloc faction Yuriy Boyko (5.2%), and Lviv Mayor Andriy Sadovyy (4.9%).

2.9% of respondent would support Prime Minister Volodymyr Groysman for president.

15.9% of respondents said they would vote other politicians, 19.2% found it difficult to answer.

If the elections were held next Sunday, the other parties would not take the 5% threshold in the parliamentary race. 4% of respondents would vote for Volodymyr Zelenskyy's Public Servant, 3.2% – for the All-Ukrainian Union Svoboda, 1.7% – for Saakashvili's Movement of New Forces, 1.5% – for the Agrarian Party, 1.3% – for the Social Movement People's Control of Dmytro Dobrodomov, 1.2% – for Serhiy Kaplin's Party of Ordinary People.

The survey was held from 15 to 19 December, 2017 and embraced 2,004 adult respondents across Ukraine, except for the occupied territories. The statistical margin of error was within 2.3%.