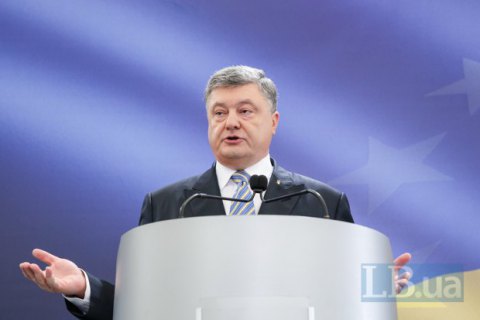 President Petro Poroshenko urges Ukrainian mass media to come up with proposals on how to counteract fake news.

"Is it not important for us now to find a way of countering the spread of Russian fakes in the Ukrainian information space? Sometimes our opposition is not against mongering [such fake news]. Even the media that position themselves as deeply pro-Ukrainian, patriotic and European-oriented from time to time swallow the bait," Poroshenko said in a speech on the occasion of the Unity Day and the 100th anniversary of the proclamation of the independence of the Ukrainian People's Republic.

Poroshenko added that the issue of combating Russian propaganda is being discussed at the level of the European Union and its member countries, and that Ukraine is coordinating efforts on this issue with international partners.

The Georgian TV channel Rustavi-2 published materials allegedly indicating Petro Poroshenko's appeal to the FSB of Russia, dated February 2007, where Poroshenko allegedly pledges not to act "against the interests of Russia."

Poroshenko's administration discussed the published documents "a cheap forgery and fake, fabricated by Russia's special service and leaked to Rustavi-2."