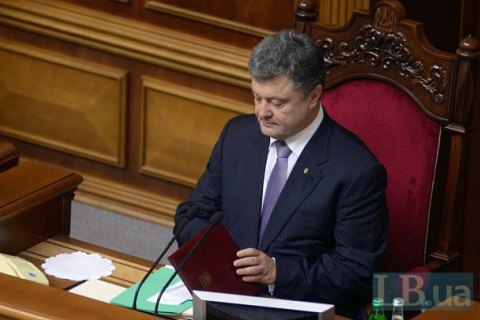 President Petro Poroshenko on Monday, 22 January, took part in the grand opening of the exhibition in the Ukrainian House dedicated to the centenary of the proclamation of the independence of the Ukrainian People's Republic.

In a short speech, the president once again drew parallels between today's events and events the Ukrainian revolution in 1917-1921.

"I would like to remind everyone that Russia then used the same methods of hybrid war against the Ukrainian state as it does now. Look: the then Russia in an official statement denied the presence of its troops on the territory of the Ukrainian People's Republic. Then came the creation of puppet pro-Russian "republics". Russia's financial and armed support of the so-called rebel movements… However, today we are much stronger, much more integrated, much more experienced," said the head of state.

On 22 January 22, 1918 for the first time in the twentieth century, Ukraine declared independence. The Ukrainian People's Republic lasted for three years. During this time, Ukraine created and approved the state border, money, language, symbolism, and a capable army.

On its first anniversary of independence, on January 22, 1919, the UPR noted the adoption of the Zluka Act from the Western Ukrainian People's Republic.

On this, Ukraine celebrates two important historical events: the first proclamation of Ukraine 's independence and the Day of Unity.