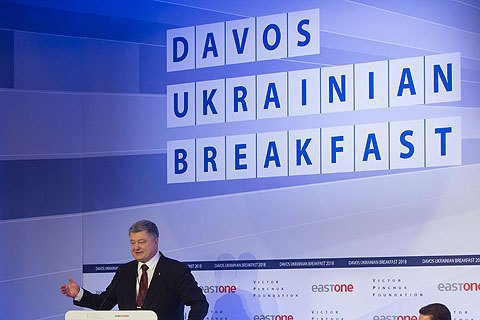 The number of foreign investors interested in Ukraine has significantly increased over the past year, says President Petro Poroshenko.

"I am proud to say that this year I have received numerous inquiries from foreign investors with requests to meet. [Those are] major investment players. It has never happened before," Ukrainian leader said on 25 January in a speech at Ukrainian Breakfast which takes place in the framework of the 48th annual meeting of the World Economic Forum in Davos.

"We received the results of various surveys on the country that is among the top priorities on the emerging markets for the investors. They called Ukraine," said Poroshenko.

In this context, Poroshenko hailed the adoption of a new law on privatization.

"For 20 years there’ve been all talks and no action. We introduce the holding of privatization under the British legislation. This system enjoys investors’ trust. It is supported by the foreign advisors and is carried out under an absolutely transparent procedure..." he said.

The privatization of state property in 2017 generated 3.376 bn hryvnya in revenues to the state budget (19.7% of the planned 17 bn hryvnya).

The state budget-2018 provides for 22 bn hryvnia proceeds from privatization.