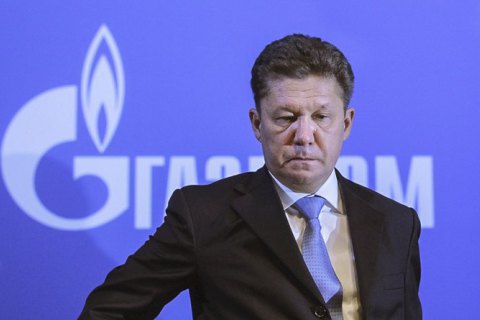 After losing the case in the Stockholm arbitration, the Russian gas monopoly Gazprom moved to kick off the procedure for the termination of contracts for transit and purchase of gas earlier signed with the Ukrainian oil and gas company Naftogaz Ukrayiny.

"Gazprom is forced to immediately launch the procedure for the termination of contracts with Naftogaz Ukrayiny for the supply and transit of gas in the Stockholm arbitration," the Russian company said in a statement published on Facebook.

According to Gazprom CEO Aleksey Miller, the Russian company resorted to such steps after seeing the Stockholm arbitration ruling. "The Stockholm arbitration, guided by double standards, adopted an asymmetric decision on contracts with Naftogaz Ukrayiny for the supply and transit of gas," Gazprom said, adding that the arbitration decision significantly violated the balance of interests of parties under these contracts, and is forcing Gazprom to solve Ukraine's economic problems.

"In such a situation, retaining contracts is economically inexpedient and unprofitable for Gazprom," the press service added.

After seeing the court's decision, on the morning of 1 March, Gazprom refused to supply gas to Ukraine in March 2018. At the same time, the Russian company has already received an advance payment from Ukraine. Naftogaz called Gazprom's reaction a violation of the Stockholm arbitration ruling. Moreover, according to Ukrtranshaz, Ukraine's state-owned gas transport system (GTS) operator, there has not been a single day that Gazprom observed a contractual demand to maintain the necessary level of gas pressure at the entrance to the Ukrainian GTS.

The Cabinet of Ministers of Ukraine introduced a five-day national action plan to prevent energy crisis over the actions of the Russian monopoly, which, among other things, provides for the transfer of generating companies from gas to boiler oil, as well a shutdown of educational facilities until 6 March. On 1 March, Naftogaz CEO Andriy Kobolyev called on consumers to limit gas consumption on 3-4 March due to the freezing temperatures across Ukraine and the Russian Gazprom's refusal to supply gas to Ukraine from 1 March.

Speaking at the meeting of the National Security and Defence Council, he said that due to a rough winter chill, a record daily gas consumption of 200m cu.m. is being observed, with 18m cu.m. of gas becoming a deficit, which could have been covered by gas supplies from Russia. Kobolyev noted that this deficit will be partly covered by gas purchases at high prices from the European direction, adding that Gazprom would be billed for them later as a result of the non-fulfillment of contract.

"At the same time, we still believe that approximately 10m cu.m. of gas per day will be the expected deficit, which we cannot now cover," said Kobolyev.