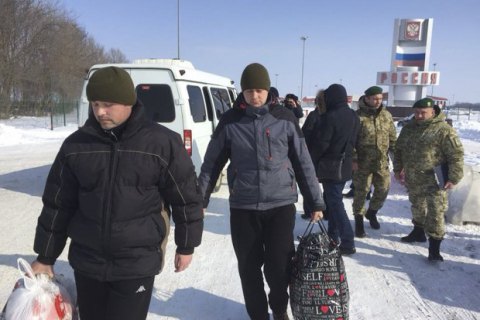 Ukraine has exchanged two Russian captives for two Ukrainian border guards, Ihor Dzyubak and Bohdan Martson, at the Hoptivka checkpoint at the Russian border in Kharkiv Region, according to UNN. The border guards were detained last October.

"As I promised at a news conference, two more Ukrainians were released from captivity. These are our border guards Bohdan Martson and Ihor Dzyubak. The aggressors abducted them in Sumy Region on 3 October last year. Welcome home, guys!" he said on Facebook.

The border guards were taken to Kiev for a medical examination where they were met by their families.

As part of the exchange, Ukraine handed two employees of the Federal Security Service (FSB), Vladimir Kuznetsov and Askar Kulub, over to Russia. They were detained by Kherson border guards and servicemen on the shore of the Perekop bay on 30 June 2017. They said that they were "pretending to be border trespassers for training purposes but got lost". They were laced into custody.