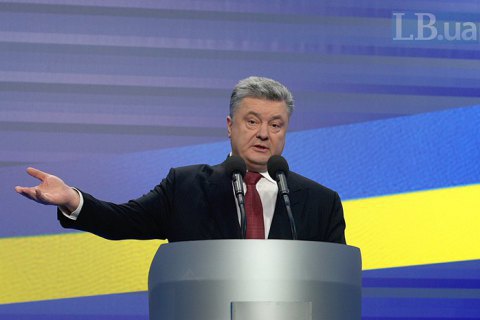 Kyiv will review all the international treaties concluded in the framework of the CIS and withdraw from those that do not match its national interests, Ukrainian President Petro Poroshenko has said at a ceremony commemorating the victims of political repressions in Bykivnya.

"Ukraine, starting from the Białowieża Forest, considered the CIS as an instrument of a civilized break up with the empire. A civilized one did not work because of Russia’s fault. Moscow sought to turn the Commonwealth into a renewed empire, where everyone, as in the old Soviet times, would synchronize watches with the Spasskaya Tower in the Kremlin. Therefore, Ukraine has not ratified the CIS Charter and was not going to become a full member of the CIS," he said.

"Now we will carefully review all the international treaties concluded in the framework of the CIS and we will withdraw from those in which we find even the slightest mismatch with national interests," he added.

He said that yesterday he enacted the National Security and Defence Council's decree, which finally stopped Ukraine's participation in the CIS statutory bodies.