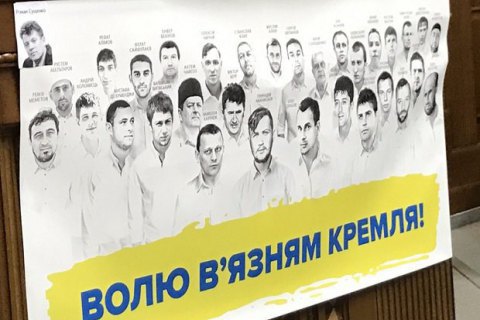 The Ukrainian Foreign Ministry has demanded that Russia release over 60 Ukrainian political prisoners, its spokesperson Maryana Betsa has tweeted.

"At least 24 Ukrainians convicted for political motives are imprisoned in the Russian Federation and over 40 in Russia-annexed Crimea. Once again we demand that Russia release the prisoners," Betsa said.

In April, the first deputy speaker and the president's envoy for a peaceful settlement in Donetsk and Luhansk regions, Iryna Herashchenko, said that Russia had left unanswered Ukraine's initiative to exchange 23 Russians convicted by Ukrainian courts to prison terms for political motives for Ukrainian political prisoners held in Russian prisons.

The Ukrainian Foreign Ministry timed its demand to Day of the Remembrance of Victims of Political Repressions traditionally marked on the third Sunday of May. This year Ukraine also marks the 80th anniversary of the Big Terror: according to historians' estimates, 198,918 people in the Ukrainian Soviet Socialist Republic were convicted from 1937 to 1938. Two thirds of them were sentenced to execution, others were sent to prisons and camps.