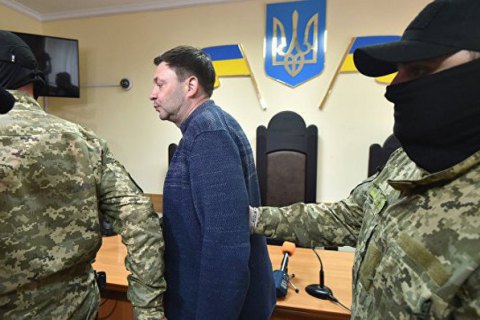 The director of the Russian news agency RIA Novosti Ukraine, Kyrylo Vyshynskyy (Kirill Vyshinskiy), whom Ukrainian authorities suspect of high treason, has said he is giving up Ukrainian citizenship in favour of the Russian one, which he was granted in 2015.

He was speaking at a session of the Kherson regional court of appeal, according to RIA Novosti.

"I would like to inform President Petro Poroshenko that I am withdrawing from Ukrainian citizenship and would ask this statement to be sent to the presidential administration. From this minute on, I consider myself a citizen of Russia only," he said.

"I would like to ask Russian President Vladimir Putin to take all the due measures to ensure my release as soon as possible and to grant me legal protection," he added.

The court was choosing a measure of restraint for him.

Vyshynskyy was detained outside his home on 15 May. The office of RIA Novosti Ukraine was searched the same day. He was declared a suspect in a high treason case. The Security Service of Ukraine (SBU) said a Russian passport and the medal "For Crimea Return".

According to the SBU, in the spring of 2014, Vyshynskyy went to Crimea where, acting on the instruction of the management of the Russia Today media group, he took direct part in a propaganda campaign in support of the annexation of Crimea by Russia. Upon his return to Kyiv, he involved journalists under his subordination in the production of content favouring the self-proclaimed separatist Donetsk and Luhansk people's republics.