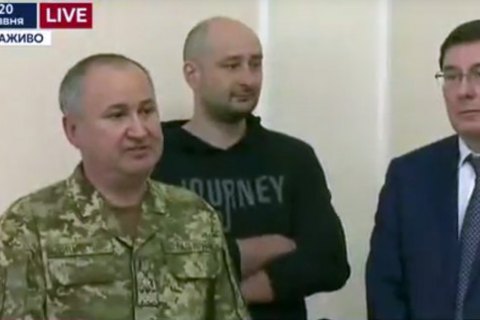 The murder of journalist Arkady Babchenko was an imitation played by Ukrainian law enforcers, the head of the Security Service of Ukraine (SBU), Vasyl Hrytsak, and Prosecutor-General Yuriy Lutsenko have said at a joint briefing. Babchenko attended it too, alive and kicking.

"I would like to apologize for what you all had to endure, for what you had to experience. I buried many friends and colleagues many times and I know this sickening feeling. Forgive me for having forced you to experience all this, but it could not have been made otherwise," Babchenko said.

He also thanked the SBU for saving his life.

"As far as I know, this operation had been prepared for two months. I was made aware a month ago. During this month I saw how the guys work, how they dig deep and work hard. This month we were in touch, we thought and acted. In the end, we had this special operation, as a result of which a person has already been detained and placed into custody.The crime has been committed and proven," Babchenko said.

According to Hrytsak, Russian special services planned to kill Babchenko, but the murder was prevented.

"According to the information obtained by the SBU, the Russian special services ordered the murder of Russian journalist Arkady Babchenko," he said.

According to Hrytsak, the Russian special services recruited a citizen of Ukraine named "G". He offered the job to his friend, a former antiterrorist operation (ATO) serviceman, for a reward of 30,000 dollars and paid him 15,000 dollars upfront.

In addition to money, the Russian special services provided their agent with a dossier on Babchenko with a detailed information about his journalistic activities and personal life, including personal data on him, his wife, parents and children, as well as their phone numbers and bank accounts, accounts in social networks, passport data, etc.

The SBU chairman added that the Russian special services also instructed the "G" agent to buy at their expense weapons and ammunition smuggled from the ATO area and organize caches in Kyiv Region.

The SBU learnt about the operation against Babchenko in advance and has been searching the perpetrators. As a result of the counteroperation, the SBU collected an “irrefutable evidence of the terrorist activities of the Russian special services on the territory of Ukraine."

After murdering Babchenko, "G" planned to leave Ukraine, but was detained.

According to Hrytsak, the SBU arrested him several hours ago.

Lutsenko said that the person who was offered to kill Babchenko cooperated with the SBU.

Babchenko, in turn, suggested that the attack was timed to the final of the UEFA Champions League in Kyiv.

On 29 May, Babchenko was reported killed in his apartment in Kyiv.