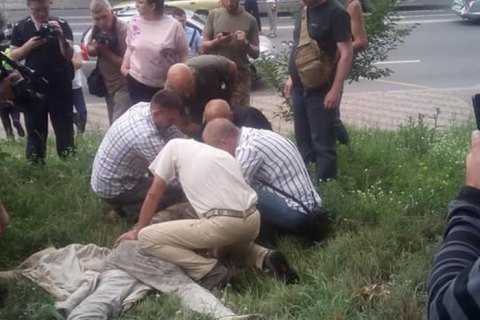 A man in fatigues has sprinkled himself with an inflammable substance and set himself on fire outside the Defence Ministry office in Kyiv's Povitroflotskyy Avenue. He was immediately knocked off his feet to extinguish fire. He received the first aid in an ambulance.

According to ZIK, he is a volunteer who took part in the antiterrorist operation in eastern Ukraine, Serhiy Ulyanov.

According to some media reports, for two years Ulyanov has been fighting for the Defence Ministry to recognize that he has the same rights as army servicemen who took part in the antiterrorist operation.

However, allegedly, these efforts have not paid and he was discharged without proper documents.

The Defence Ministry told RBC-Ukraine that Ulyanov had filed two lawsuits and lost them.

"Court proceedings are underway under his third lawsuit but he is a regular no-show," it said.

Its representatives Oleksiy Nikiforov suggested that Ulyanov's self-immolation was an attempt to influence the court.

It was not his first attempt to set himself on fire. In June, he called the Defence Ministry's hotline and said that he would do this outside its office. Later, he registered another protest with the Kyiv city administration during which he planned to set himself on fire outside the US embassy.