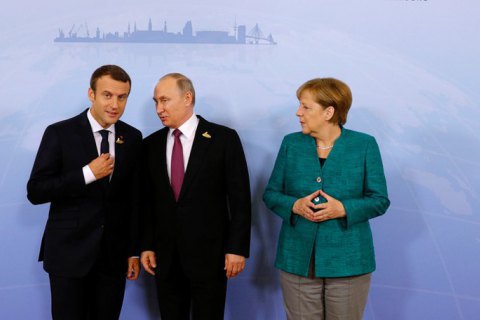 Germany and France have debriefed Kyiv in detail on the agenda of their negotiations with Russian Foreign Minister Sergey Lavrov and Russian General Staff Commander Valeriy Gerasimov, LB.ua has learned.According to European partners, the Ukraine issue was indeed raised at the talks.

"They talked about a UN peacekeeping mission. The Russians put forward their traditional messages that it does not need any strong mandate. It was also mentioned that Russian officers need to return to the JCCCC,” the source told LB.ua.

"The Russians also tried to promote the idea of a ‘referendum’ in Donbas but were delicately sent off. Therefore, Kyiv should not be afraid of backstage arrangements," he added.

At the same time, the source stressed that Ukraine was not the top issue on the agenda, which was dominated by the Middle East, refugees, Israel and Iran.

As reported earlier, the meeting between Putin’s envoys Angela Merkel and Emmanuel Macron was not publicly announced. Afterwards there was only a brief factual report saying "the conflict in eastern Ukraine was also discussed."