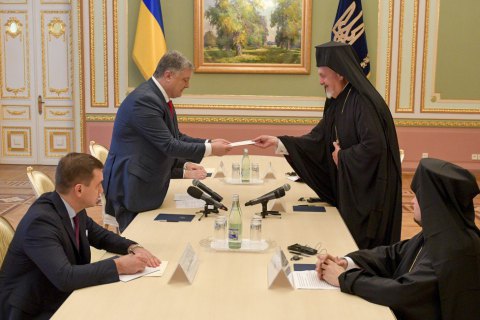 On the days of celebration of the 1030th anniversary of the Baptism of Kievan Rus-Ukraine, Ukrainian President Petro Poroshenko met the delegation of the Ecumenical Patriarchate that came to Ukraine to take part in festivities.

Bishop Ilarion of Edmonton and the Western Eparchy of the Ukrainian Orthodox Church of Canada read the address of Patriarch Bartholomew who noted the importance of the baptism of St. Volodymyr from the First Holy See Church of Constantinople in the metropolis of Chersonesos.

"The newly baptized nation came under the spiritual guidance, unrestrained care and church cover of the Church of Constantinople through the creation of the metropolis of Kyiv and All Rus, which became the 60th metropolis of the Ecumenical Patriarchate,” the address reads.

In the address the Ecumenical Patriarch said: "Recognizing the high responsibility of the First Holy See Church of Constantinople, which never ceased and did not reconcile to illegal and non-canonical situations that shocked the natural functioning of the Orthodox Church, during these crucial times, it took the initiative to restore the unity of the Orthodox believers of Ukraine with the ultimate goal of granting autocephaly to the Ukrainian church".

Poroshenko thanked His All Holiness Patriarch Bartholomew “for the constant care of the Mother Church about the believers of the Ukrainian nation that faces difficult times of aggression against our state on behalf of the Russian Federation, because of the illegal annexation of Crimea”.

Poroshenko also thanked the patriarch for his position with regard to the Ukrainian Church. “For the majority of Ukrainians, the words of His All Holiness that Ukraine is not a canonical territory of the Russian Orthodox Church are very important. That the transfer of control to Moscow in the XVII century was held in a non-canonical way. And just as we do, His All Holiness considers exactly the Patriarchate of Constantinople our Mother Church,” the president said.