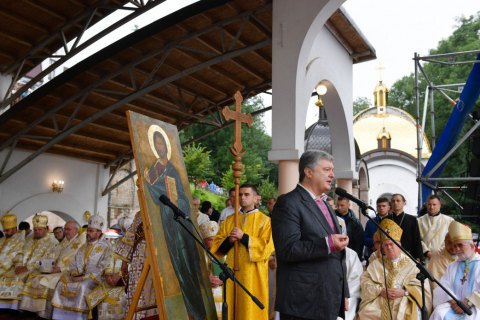 President Petro Poroshenko has said that millions of Ukrainians eagerly expect the earliest recognition of the autocephaly of the Orthodox Church in Ukraine - a large one in the number of believers, but equal to other autocephalous Orthodox churches.

"Tomos of Autocephaly will complete the consolidation of independence of our state, strengthen religious freedom and interconfessional peace. It will strengthen the rights and freedoms of citizens... Especially those who are now out of communication with the universal Orthodoxy," he said at the celebration of the 1030th anniversary of the Baptism of Ukraine-Rus.

"But I believe that the final decision of the Ecumenical Patriarchate will be fair to Ukraine. Dear friends, the time of autocephaly of the Ukrainian Orthodox Church has definitely come," he added.