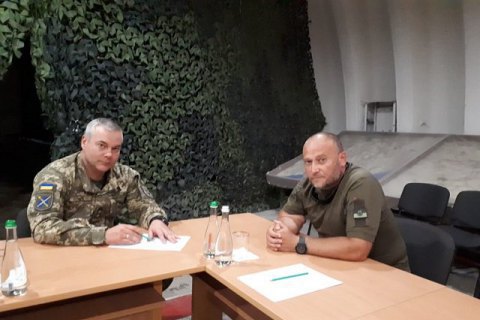 "They discussed the participation of motivated UVA fighters in units of all types of the Armed Forces of Ukraine (including as a full-fledged unit) on condition that they sign a contract (including a short-term one). They were offered to enlist into reserve military service within special-purpose, reconnaissance combat units and territorial defence units," the JFO HQ said.

Nayev said that if UVA fighters decide to join military service, potentially they will be able to serve in other Joint Forces agencies involved in ensuring security and order in Donbas.

They also discussed UVA fighters' possible participation in training forces for the protection of state border, territorial defence and Yarosh's other initiatives.

Nayev explained who, in his opinion, cannot serve on the front line and in the army's combat units in general: those who have no right to handle arms, those who are not part of the JFO and those who had earlier visited the frontline "for the sake of their own publicity".

He added that the Ukrainian legislation does not regulate the participation of UVA fighters in combat on the front line and as part of the armed forces.