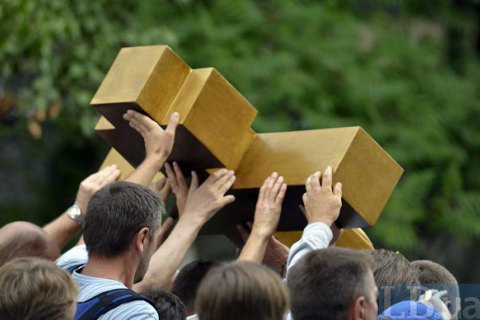 The number of level of church delegations which come to Kyiv to celebrate the 1030th anniversary of the Baptism of Rus-Ukraine, as well as the list of countries which responded to the invitation by the Ukrainian Orthodox Church by the Moscow Patriarchate (UOCMP), attests to the strategic victory of the Constantinople Patriarchate over the Moscow church diplomacy, theologist Oleksandr Sagan said in a blog post entitled "Church diplomacy: who has the upper hand?"

"UOCMP Metropolitan Onufriy invited Ecumenical Patriarch Bartholomew and the seniors of other Local Orthodox Churches to celebrate the 1030th anniversary of Baptism of Rus-Ukraine.

However, the Constantinople Patriarchate has ignored the UOCMP invitation but accepted the invitation of the president of Ukraine, and the delegation from the Mother Church does plan to attend the celebrations," Sagan said.

Other Local Orthodox Churches are sending at the Moscow Patriarchate's invitation their lowest-possible level delegations simply to stick to the long-established "church diplomatic protocol".

According to the expert, by 23 July, the following churches have confirmed they will send their delegations to the celebrations on the UOCMP invitation: the Orthodox Churches of Jerusalem, Romania, Poland, Cyprus, as well as the Czech and Slovak Orthodox Church.

The UOCMP is trying to "even out" the low representation and number of delegates in foreign delegations by other "protocol" measures.

The next day after the "Moscow-run" cross procession, on 28 July, the Kyiv Pechersk Lavra will host a meeting of embassy representatives from Russia, Belarus, Moldova, Georgia, Greece, Cyprus, Serbia, Macedonia, Bulgaria and Romania. To give it a bigger scale, representatives of the Serbian, Macedonian, Bulgarian, Georgian, Belarusian and American Orthodox Churches are also invited.

"Summing up, it is possible to state that the number and level of church delegations that will visit Kyiv during the 1030th anniversary of the Baptism of Rus-Ukraine, as well as the list of countries that responded at all to the UOCMP invitation testify to the strategic victory of the Constantinople Patriarchate over Moscow's church diplomacy. This means that the idea of Tomos for the Ukrainian Orthodoxy 'has matured' not only in Constantinople and Kyiv but also in other Orthodox 'diptychial' churches. Let us wait for the autumn," the expert concluded.