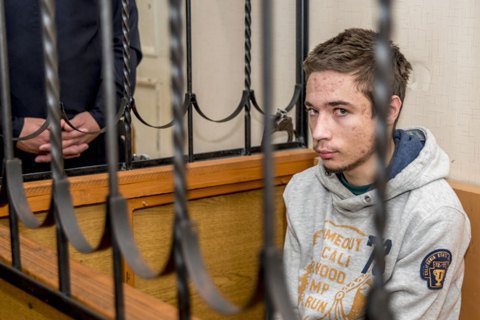 On 23 July 2018, a court in Russia's Rostov-on-Don, Russia returned the indictment back to prosecutors in the case of 20-year-old Ukrainian national Pavlo Hryb and extended his arrest until 22 October 2018.

The board of judges of the North Caucasus District Military Court in Rostov ruled to return the case to prosecutors for revision, Censor.NET reports.

The presiding judge is Sergey Gorelov.

The judge explained that the prosecutor had quoted in the indictment the old version of Article 205.1, which provides for up to eight years of imprisonment.

At the same time, under the new wording of this article, Hryb may face up to 10 years in prison. On this basis the case was returned to prosecutors.

Trumped-up charges have been pressed against the teenager under Article 205 of the Russian Criminal Code (an act of terrorism). Russian investigators accused Pavlo Hryb of allegedly plotting a terrorist attack at a school assembly in Sochi.

Pavlo Hryb has portal hypertension, which requires the daily intake of necessary medications and a special diet, the lack of which could become fatal. Russian authorities do not allow Ukrainian doctors to examine the political prisoner's health.