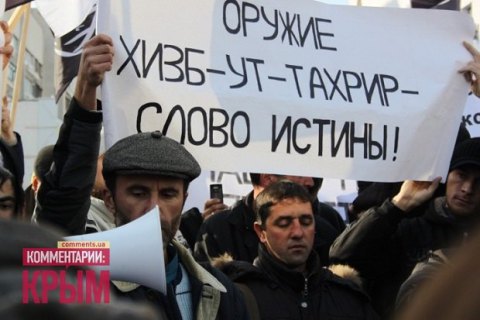 Crimean Tatar Hulsum Aliyeva, whose house was searched this morning, is subject to a pre-trial investigation under Article 282 of the Russian Criminal Code (fueling of hatred or enmity). She and her lawyer Edem Semedlyayev learned this from the Russia-controlled Investigations Committee in Alushta, according to an LB.ua correspondent.

"They are talking about an image shared on Facebook showing certain philosopher Ivan Ilyin. Reportedly, it contained some statements about Russia and Hulsum shared this image. An investigator told us that at the moment, a pre-trial investigation into the extremist Article 282 is underway. This means a criminal case has not been opened. My experience tells me that such pre-trial checks take a very long time, from half a year to a full year. This entire time a person is 'on the hook' and afraid of showing any active position. This is one of the means of intimidation," Semedlyayev said.

Aliyeva was released after a talk with the investigator. She later said that law enforcers took keen interest in her mobile phone which they had failed to find. Because of this, she said, they had to start the search again and again.

According to earlier reports, Crimean Tatar activist Emir-Usein Kuku, who is a defendant in the Yalta case of the pan-Islamic movement Hizb ut-Tahrir banned in Russia, stopped his hunger strike on 19 July after 24 days. Kuku demanded that all Ukrainian political prisoners be released.