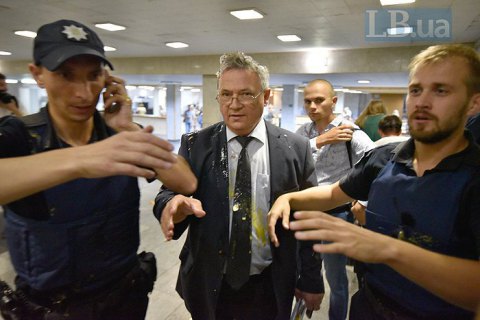 The leader of the Patriotic Party, ex-MP Mykola Haber, has been pelted with eggs in Kyiv on suspicion of his connections with pro-Russian politician Viktor Medvedchuk.

According to an LB.ua correspondent, Haber co-organized the Forum of Patriotic Forces in the Ukrainian House.

Representatives of far-right organizations, such as C14, Veteran Brotherhood and others, came to the Ukrainian House before the event. They entered into an argument with the forum organizers, having spotted Natalya Myrolyub, who once headed the Boryspil branch of Viktor Medvedchuk's Ukrainian Choice, among them.

After Haber said that he took part in the Maydan protests in 2013-2014 but did not see the nationalists who came to the Ukrainian House today there, he was pelted with eggs.

The situation did not escalate to a proper fight.

An old lady got sprinkled with brilliant green as a result.

Eventually, the forum where 500 delegates (according to the organizers) were to set up a new "public-political movement of patriotic forces" did not take place. The organizers blamed it on

Haber was a member of parliament of the third convocation (1998-2002), representing the Progressive Socialist Party of Ukraine.