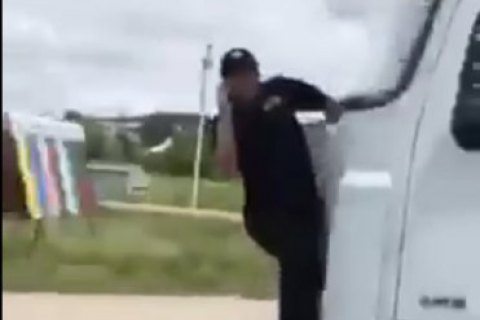 A truck driver attempted to get away from a transport safety inspector in Chernivtsi. The latter wanted to stop the truck and jumped on its hood but the driver did not stop. As a result, the truck carried him the inspector for about 5 km, the local news website molbuk.ua has said.

"I stopped a Renault Magnum truck. I was to check its weight and documents. I introduced myself and went to my workplace. Suddenly, the driver reversed and I found myself right in front of the hood. I had no other choice but to jump on the truck," inspector Denis Klyuchevskyy said.

The driver did not react and continued movement.

"The driver continued movement. I was carried on the hood for almost 5 km. The speed was around 60-70 km per hour. The driver pulled into a parking spot for trucks and stopped. He closed the car and ran away. The patrol police found him in the bush 700 m away from the stop. He could not explain why he did this," he said.

During the ride, the inspector managed to call the police, explain where the truck was heading and film the video. He did not incur any injuries and reported back to work.

Police arrived at the sire in 3-5 minutes and drew two administrative offence reports for the truck driver. It turned out that the driver had had 13 unpaid tickets.

It is unclear whether the driver was detained and whether he was under the influence.