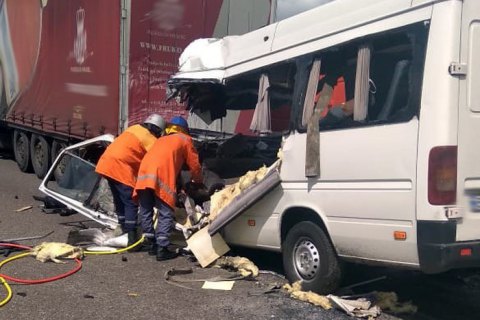 Ten people got killed and 10 more were injured as a result of the collision between a shuttle bus and a truck on the Kyiv-Chop highway in Zhytomyr Region, the local police have said.The incident took place at around 10.40 a.m. Kyiv time near the village of Hlybochytsya, Zhytomyr District.

The injured people were taken to hospital.

According to preliminary reports, the shuttle bus going to Zhytomyr collided with a DAF semi-trailer truck.

The region declared a day of mourning on 21 July.

Earlier today, a shuttle bus hit a truck parked on the sideway in Mykolayiv Region. The bus driver and four passengers were killed and 12 more people injured.