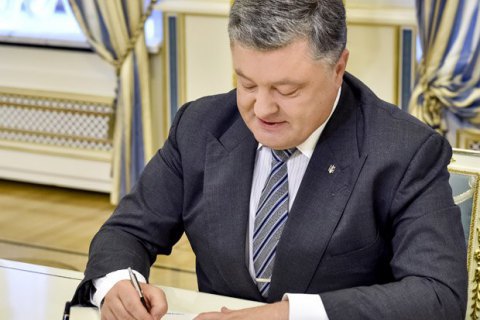 It is noted the Ukrainian Foreign Ministry should inform Russia about Ukraine's decision to terminate the Treaty on Friendship in accordance with Article 40 of this document and submit a draft law on the termination of the Treaty to the president of Ukraine.

Moreover, according to the NSDC's decision, the Ukrainian Foreign Ministry should inform the United Nations, the Organization for Security and Cooperation in Europe, other international organizations about Ukraine's desire to terminate the Treaty and the grounds for its termination.

The Ukrainian president's representative in parliament, Iryna Lutsenko, said the Ukrainian Foreign Ministry would inform Russia until 30 September about Ukraine's decision to terminate the treaty, and the head of state would submit the relevant bill to the parliament in accordance with Article 24 of the Law "On International Treaties of Ukraine."

As UNIAN reported, Poroshenko said on 28 August he was waiting for a package of documents from the Foreign Ministry to start the process of terminating the Treaty of Friendship, Cooperation and Partnership between Ukraine and Russia.

UNIAN recalled that the Treaty on Friendship, Cooperation, and Partnership between Ukraine and the Russian Federation was signed by then Ukrainian President Leonid Kuchma and his Russian counterpart Boris Yeltsin on 31 May 1997.

The document registered the principle of strategic partnership, the recognition of the inviolability of existing borders, respect for territorial integrity and mutual commitment not to use its territory to harm the security of each other.

It automatically extends on each 10th anniversary of its signing, unless one party advises the other of its intention to end the treaty. After Russia annexed Crimea and unleashed war in Donbas in 2014, there have been repeat calls in Ukraine to sever the treaty.