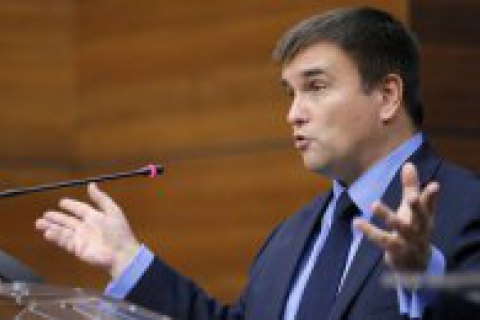 "We delivered the relevant note to Russia today," Klimkin said at a news briefing in Kyiv on Friday.

This treaty does not even contain a provision regulating the settlement of disputes between the two states, he said.

Ukraine will not allow "Russia to manipulate the suspension of a number of bilateral agreements," Klimkin said.

A bill on the non-extension of the treaty will be submitted to parliament after interagency clearance inside Ukraine, he said.

"As soon as the relevant presidential decree was made public, even before its publication, we had drawn up the draft. I signed it the same day and started the internal interagency clearance procedures. There is such a procedure, and we will unhurriedly carry it out now with our lawyers, including with our partners. [...] This must be done before the date the treaty expires. This legislation is very simple. In fact, it consists of several lines," he said.

The Ukrainian National Security and Defence Council decided on September 6 to support President Petro Poroshenko's proposal that the treaty not be extended for another ten years. Poroshenko told the Council he would instruct the Foreign Ministry to forward a note to Russia on terminating the treaty as soon as possible.

The Council resolved that the Ukrainian Foreign Ministry must inform the United Nations, the Organization for Security and Co-operation in Europe (OSCE), and other international organizations of Ukraine's desire to terminate the friendship treaty with Russia and of the reasons of its termination.

The treaty was signed on 31 May 1997 for a period of ten years (with subsequent automatic prolongation of the document unless the parties took steps to prevent it). Parliament ratified the document on January 14, 1998, and the State Duma ratified it on December 25, 1998. The treaty took effect on 1 April 1999.

The treaty outlines the principles of strategic partnership, inviolability of existing borders, respect for territorial integrity, and mutual obligation not to use the other country's territory to jeopardize its security.