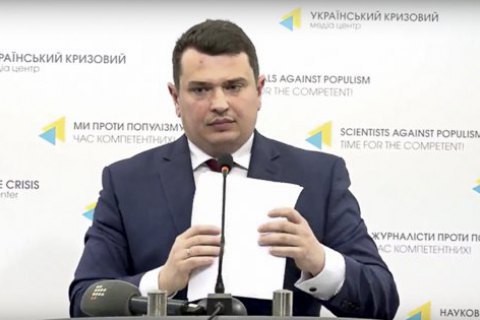 The director of the National Anticorruption Bureau of Ukraine (NABU), Artem Sytnyk, is facing criminal charges opened by the Specialized Anticorruption Prosecutor's Office (SAPO) over possible disclosure of information amid a pretrial investigation.

The case was opened after Infrastructure Minister Volodymyr Omelyan, who is suspected of illegal enrichment, alleged that Sytnyk had informed him about a planned raid on his house, the SAPO said on Facebook on Friday.

"Preliminarily, this statement is not seen as groundless, as materials of the criminal case used for indicting him contain information about telephone connections between Omelyan and the subscriber recorded as Artem Sytnyk prior to the raid, namely at 08:00, 11:32, 19:09, 23:42 on 2 November 2017," the SAPO said.

"At the same time, we draw your attention to the fact that Sytnyk consistently, constantly and systematically discloses information related to pretrial investigations, which is unlawful and significantly harms the interests of the investigation," it said.

Infrastructure Minister Volodymyr Omelyan was reported to have said he had learnt about a pending search in his house from NABU chief Artem Sytnyk.