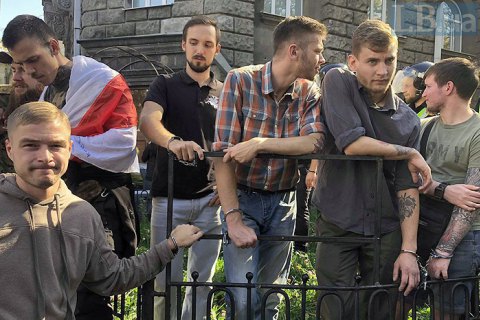 Five Belarusians who are members of the Azov battalion have chained themselves to the fence of the Ukrainian presidential administration in Kyiv.

An LB.ua correspondent is reporting that they are demanding the authorities tackle the problem of foreign volunteer fighters who have no Ukrainian citizenship. One of the fighters, Denis Prokhorov (Dzyanis Prokharaw), said that his Belarusian passport is expiring soon and he does not know what to do next.

The volunteers are asking for Ukrainian passports. They insist the citizenship commission under the president of Ukraine should be disbanded as inefficient.

Their protest was supported by members of the National Corps which rallied outside parliament, demanding legal protection for foreign fighters.