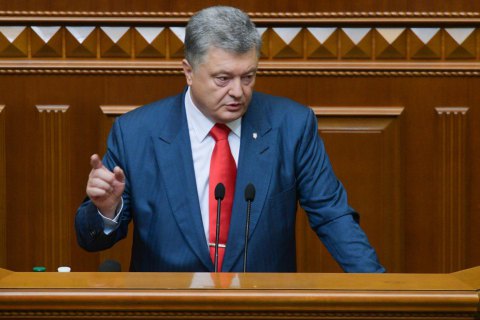 The following are the key excerpts from his speech:

- "Today, the Supreme Council of Ukraine will vote on the amendments to the Basic Law on the irreversibility of the course on Ukraine's membership in the European Union and the North Atlantic Treaty Organization. Availing myself of this opportunity, I urge all of you, dear MPs, to support this initiative and submit this document for examination by the Constitutional Court."

- "This project fully corresponds to our national interests and the mood of most of our society.".

"The Kremlin is trying to persuade our allies of the alleged preparation by Ukraine of the power scenario for the liberation of the Donbas. Of course, we should have this option, because every army should be ready for any scenarios. Ukraine has the right to self-defence in accordance with Article 51 of the UN Charter. And we have emphasized this separately in the recently approved Law on the Donbas reintegration. But our strategy for peace is to reach it politically and diplomatically, because it is optimal for Ukraine and is in line with our national interests."

"Russia's attack began with the attempt to annex Crimea and it must be finished with its return - including the reimbursement of damages incurred and the provision of effective guarantees of non-recurrence of the aggression. We are struggling for this in international courts and we are convinced that we will win as we won in Stockholm," the Head of State emphasized.

"We convince the whole world that any concession in favour of the Kremlin without restoring the territorial integrity of Ukraine is a defeat. Defeat of law and freedom. This is a defeat of the democratic Europe and the victory of the authoritarian Asiope. Meanwhile, the whole country is full of billboards calling for a "compromise" with the aggressor."

- "Real progress in the settlement must be demonstrated, the main indicator of which is harmonization of parameters of deployment of a peacekeeping mission under the aegis of the United Nations in Donbas."

- "I will talk about this next week during a speech in New York at the United Nations General Assembly. The mission must necessarily be deployed throughout Ukraine reaching the Ukrainian-Russian border."

- "This will create conditions for the implementation of part of the Minsk agreements, including the withdrawal of Russian troops from the occupied Ukrainian territory," he added.

- "Our defence needs are well beyond our capabilities. And we have to find non-standard solutions."

- "Today, we have to reach a completely different level: new technologies, modernization, armament and rearmament, as well as the transition to NATO standards taking into account our unique experience of rebuffing the aggression."

- "As president, I guarantee free, fair and democratic elections of the Head of State, new Parliament, local self-government bodies as they were held in 2014-2015."

Elections must "once again establish Ukraine as a leader in adhering to the standards of democracy in the post-Soviet space".

- "I would also like to urge not to destroy the country with populism, soberly assess the unprecedented complexity of challenges and threats facing Ukraine. After all, most of them do not have simple solutions. Do not believe it."

- "We must respond to all risks and threats by means of a responsible choice when it will be necessary not only to elect the president and the new parliament, but also to confirm the immutability of our pro-European state course".

- "The spectre of authoritarianism is not the only challenge associated with the upcoming elections. The threat of revenge is also relevant. Unfortunately, there are figures on the Ukrainian political chessboard controlled by Moscow."

- "We see how the fifth column raises its head, tries to collect various rows in a heap activates efforts in the information space taking advantage of democracy. Our task is extremely difficult - to resist them without violating the norms of European democracy."

- "Some TV channels, newspapers and Internet publications became undisguised voices of Russian propaganda. I share the opinion of the Chairman of the Verkhovna Rada that during the election period, information security issues are one of the main issues, that part of our information field is just as occupied as part of our sovereign territory."

- "A network of Russian agents still operates in Ukraine, has control of the media, breeds "independent civic organizations”. They are really independent, independent from Ukraine, but controlled by the Kremlin. They are instigating anti-Ukrainian, anti-European and anti-American sentiment."

- "I emphasize, of the aggressor state, therefore, this law will in no way affect civil society, mass media and freedom of speech."

- "Pigeons of peace" are almost on every pillar ... But the shadow of these pigeons resembles a double-headed one. And you shouldn’t be deceived with a soothing cooing, because the beak of these turtledoves brings seeds of peace under Russian conditions," Petro Poroshenko emphasized.

- "Peace” is a beautiful and attractive wrapper, in which you can put everything you want. So we have to be vigilant. Do not forget that the enemy came here not for Crimea, not for the Donbas, it came for the whole Ukraine. The empire is impossible without Ukraine. So where will we draw the boundary of the so-called compromise - on the Donets, on the Dnieper, on the Zbruch?"

- "They said it publicly. I do not know when exactly the Tomos will be approved and when it will be brought to Kyiv. But I am sure that the wheel of this story has been ramped up so that nobody will be able to turn it back."

- "As the Scripture reads, we will certainly not worship other gods. And the state will not interfere in the internal affairs of the church, especially the foreign state. Why are they struggling for this? Because the empire loses one of the last levers of influence. Tomos is actually another Act of Declaration of Ukraine's Independence."

- "For us, our own church is a guarantee of spiritual freedom. This is the key to social harmony."