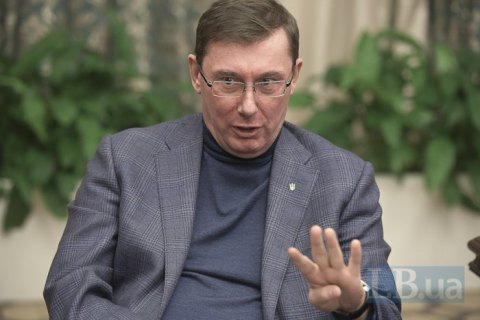 Prosecutor-General Yuriy Lutsenko has said he is going to resign to be able to engage in an election campaign.

He said in an interview with One Plus One TV's TSN.Tyzhden show that he would stay until the end of the presidential election campaign because it would be a "serious guarantee that it would be held in accordance with law and in the set time framework, without any fantasies on the issue".

"On the other hand, once I am done with this, I think I will return to politics approximately in May. You will see I will have something to report about in the spring," he added.

He said he would not work for any of the elections staffs, including that of President Petro Poroshenko.

"I will not be a member of the incumbent president's election staff. This is clear. Neither I am going to pay attention to procedural processes with regard to other participants in the run in any way. There will be no specially opened cases against candidates, although I know that some are dreaming of being interrogated so that they could become a victim. No way," he said.