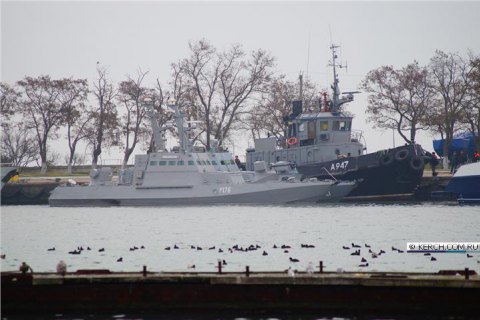 The Ukraine-controlled Crimean prosecutor's office has said that Russia violated the Geneva Convention by detaining and arresting Ukrainian naval servicemen.

Under Article 2 Part 1 of the Ukraine-Russia treaty on the use of the Sea of Azov and the Kerch Strait, merchant ships and warships enjoy freedom of navigation. Article 38 of the UN Convention on the Law of the Sea grants them the right of transit passage.

Therefore, the Ukrainian sailors did not illegally cross the Russian state border but they are now subjected to criminal persecution in Russia-occupied Crimea.

According to Ukrainian prosecutors, the sailors are deprived of the right to unbiased and adequate judicial proceedings, which a serious violation of POW treatment under Article 130 of the 1949 Geneva Convention.

Therefore, they opened criminal proceedings in accordance with Article 438 of the Criminal Code on violation of war laws and practices.

Crimean prosecutor Gyunduz Mamedov said: "The captured Ukrainian sailors have the status of prisoners of war and are subject to the Third Geneva Convention, which is why Russia is obligated to observe the relevant norms of international humanitarian law when dealing with the Ukrainian sailors. For Ukraine, on the other hand, it is extremely important to apply these norms to ensure more effective protection of our citizens who were captured."