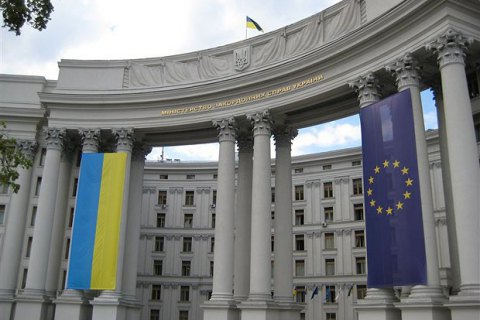 The Ministry of Foreign Affairs of Ukraine has expressed its strong protest to the Russian Federation in connection with the armed attack and capture of the Ukrainian navy ships Berdyansk, Nikopol and the tug boat Yani Kapu, as well as the wounding and capturing of members of their crews.

The following is the text of the Foreign Ministry's statement in English:

"The attack on Ukrainian ships that was carried out during a sea crossing from the port of Odessa to the port of Mariupol, in accordance with the provisions of all effective multilateral and bilateral international treaties and navigation rules, is nothing but another act of armed aggression of the Russian Federation against Ukraine, as defined, in particular, in Article 2 of the Charter of the United Nations and the provisions of UN General Assembly Resolution 29/3314 of 14 December 1974 on the definition of aggression. Russia has de facto expanded its military aggression against Ukraine to the sea.

Kremlin’s criminal regime has today once again demonstrated that it won’t stop its aggressive policy and is ready for any acts of aggression against the Ukrainian state.

Ukraine demands to provide urgent medical assistance to the wounded and to ensure their immediate safe return home. Ukraine also demands to return the captured navy ships and to compensate for the damage caused.

It is Kremlin’s regime who bears full responsibility for further aggravation of the situation in the Azov and Black Seas and for undermining the peaceful settlement of the Russian-Ukrainian armed conflict.

Ukraine urges its allies and partners to take all necessary measures to deter the aggressor, i.a. by applying new and strengthening existing sanctions, as well as by providing Ukraine with military assistance to protect its territorial integrity and sovereignty within the internationally recognized borders."