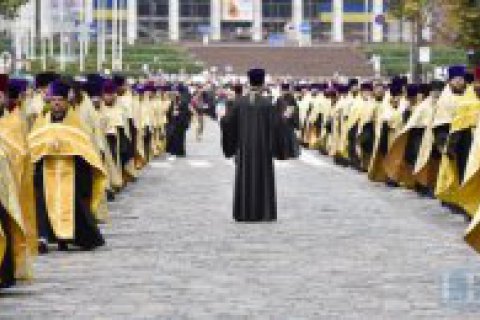 Last week, parish groups of the Ukrainian Orthodox Church of the Moscow Patriarchate (UOC MP) in the Viber chat messenger received a request to share the trailer of Metropolitan Onufriy's show "Primate's Word" on pro-opposition Inter TV. Generally, video ads featuring a religious leader are common, there is nothing new in this. However, I noticed one particular thing about the text of the request being shared.

Here is the full text:

"His Grace Klyment sent this text: Good morning! I would like you to share in social networks exactly this link to FB, it will be targeted, this is important! And please pass it on to other groups." 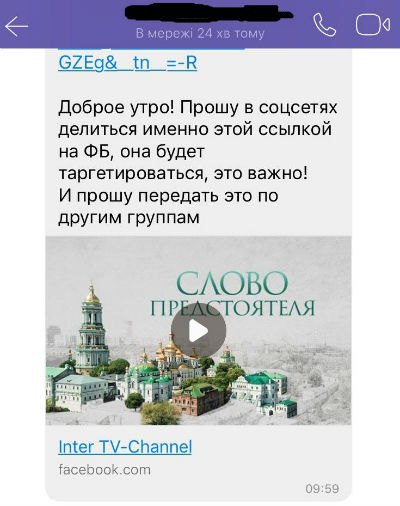 The man in question is obviously Archbishop Klyment (Vecherya), the head of the Information and Education Department of the UOC MP. There is no other “his Grace Klyment” in the UOC MP. He is the official spokesman for the church.

But this is not the most important thing. The word "target" is of interest. Targeting is an advertising tool that determines the target audience. On Facebook, you can place ads with specific content targeting those users who share a link or like a page. So, those who shared the video that Archbishop Klyment sent out are now targeted. This means that ads can now be shown to them as a separate group.

What does it mean? This means that with the help of UOC MP spokesman Archbishop Klyment, parishioners of this church are being singled out into a group which can be shown specific ads.

Who needs it? Let me wind back a while. A similar targeting method was used in the US presidential election in 2016. A potential audience was analysed and several groups with common interests were identified. Then, using these interests, users were offered a certain kind of advertising. Knowing the sentiment in a group, you can give them the advertising content that they will accept. That is exactly what happened in the US election. Each group of voters was offered advertisements matching their interests. That is why voters considered Trump to be the right candidate to fulfil their expectations.

Let's get back to our context. If the UOC MP wanted to do its own audience targeting, it would use the church resource. At least to be able to send ads directly. Since parishioners are targeted through the Inter TV channel, they are going to use the channel's data, not that of the UOC-MP.

What is in it for the channel? To build a competent information campaign, the political force that Inter will promote will need to offer the agenda relevant to each particular group of pro-Russian voters.

For active UOC MP parishioners who oppose the concept of an independent Ukrainian Church, pro-Russian politicians will feed the idea of "protecting canonical Orthodoxy" (as Vitrenko did in the mid-2000s) and promise that if they vote for them, these politicians will revoke this decision. Here is an example of such creativity:

The most interesting thing is that the man in the high rank of archbishop is involved in this campaign to track down and influence the flock. And not an ordinary one for that matter but the spokesman, who is the face and "talking head" of the UOC MP.

I remember that a decade ago, the UOC MP fully supported certain public contempt for identification codes and tax numbers. They justified this by saying that parishioners could be manipulated, they would be forced to do things contrary to their faith. And now, a few years later, the church is collecting the digital data of its own believers, against which it had earlier warned its congregation. And it had warned them in a very hybrid manner, simultaneously setting them up against their own state. Because when they talked about codes and total control by the Antichrist, they were pushing the idea of the god-opposing nature of state authorities wanting to tempt people, turn them away from Orthodoxy and truth, etc.

It appears that the upcoming elections will not be void of campaigning by religious organizations. And while some are working on getting the Tomos and uniting the churches, others target their audience to squeeze the maximum benefit out of it.