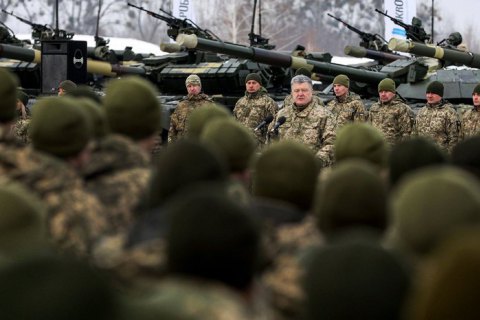 Ukrainian President Petro Poroshenko has announced the end of martial law as of 2 p.m. on 26 December.

"Today, at 2 p.m., martial law will be terminated. This is my principled decision. It is based on the analysis of all components of the current security situation in the state," he said at a meeting of the National Security and Defence Council of Ukraine.

He noted that the decision was taken despite the fact that the situation around Ukraine had not changed much.

"You see that the OSCE has confirmed our intelligence data, we detected an increase in military equipment and the Grad multiple launch rocket systems near Luhansk Region; a higher number of artillery; tanks seen on satellite images of our NATO allies were not withdrawn; the Russian military presence in the Sea of Azov has not been reduced. Unfortunately, the military personnel have not been withdrawn either," he added.

At the same time, the president pointed out that "the defence capabilities of the Armed Forces of Ukraine and other security and defence units have increased dramatically".

President Petro Poroshenko declared martial law following the armed attack by Russia against three Ukrainian naval vessels and their crews off the Kerch Strait on 25 November.