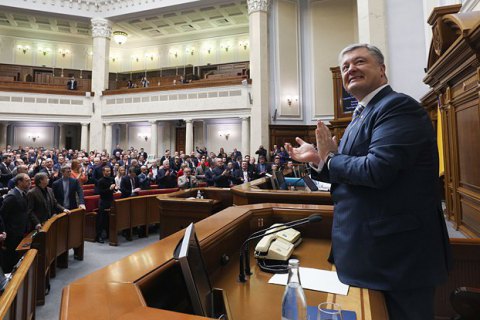 Parliament has approved amendments to the constitution, thus registering Ukraine's course for full-fledged membership of the EU and Nato. MPs have also removed the clause which allowed a foreign state to have military bases in Ukraine.

Bill No 9037 was supported by 334 MPs. The session was attended by President Petro Poroshenko who said, in particular, that Nato membership is a guarantee of security for Ukrainians.

The preamble to the constitution now says that parliament confirms the European identity of the Ukrainian people and the country's irreversible course for European and Euro-Atlantic integration.

Parliament is authorised to implement the strategic course for full-fledged membership of the EU and Nato.