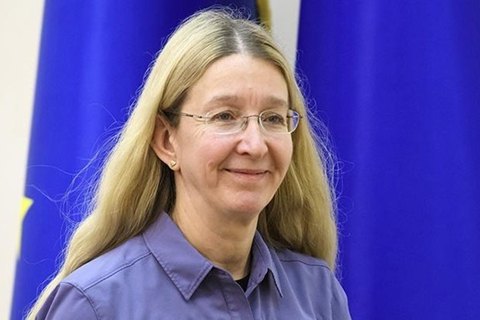 The decision was taken on 5 February in response to MP Ihor Mosiychuk's motion.

He asked the court to establish that Suprum lacks authority "because a competent body has not appointed her to the mentioned post in accordance with the established procedure".

Suprun has been the acting health minister of Ukraine since 27 July 2016.

In Ukraine, ministers are appointed by parliament.

A court ruling takes effect once it is signed by a judge. It may be appealed within 15 days.

According to later reports, although the court banned Suprun from acting as health minister, it did not ban her from carrying out her duties as first deputy minister.

The court explained its decision, saying Suprun has been the acting minister for more than one month. However, after that period she could only act as the first deputy minister.

The court also took into account the fact that after she was granted Ukrainian citizenship in 2015, she retained her US citizenship, whereas the law says only single citizenship is allowed in Ukraine.

LB.ua earlier reported that Ukrainian legislation does not say how long ministers can remain acting. The issue is unregulated at all.

However, according to the law, members of the Cabinet of Ministers are appointed by parliament, not the prime minister the way it happened in Suprun's case. Prime Minister Volodymyr Groysman's resolution said Suprun would fill in for the health minister temporarily but it did not mention the exact time framework. The law on the central executive says a "ministry is headed by a minister of Ukraine who is a member of the Cabinet of Ministers of Ukraine". It does not mention any "acting" role, which leaves a space for lawsuits.

In 2015, then Prosecutor-General Viktor Shokin played a video showing MP Mosiychuk demanding and accepting a bribe for business assistance. However, he has not been punished.

The Kyiv district administrative court has taken many controversial decisions lately. In particular, in December, it overruled the dismissal of State Fiscal Service chief Roman Nasirov.