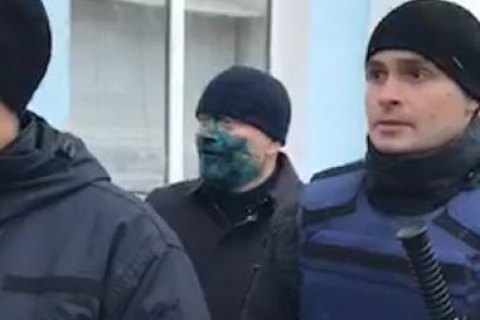 MP Oleksandr Vilkul has been splashed with brilliant green in Berdyansk.

He was nominated as candidate for president by the Opposition Bloc-Party of Peace and Development.

The local news website Berdyansk 24 said that the incident took place outside a local culture centre where activists were protesting against Vilkul's visit. When he and his guards tried to enter the centre, a clash between the protesters and law enforcers broke out.

Vilkul failed to enter the building because the entrance was blocked. As a result, he had to leave.

On Facebook, he complained that he failed to meet voters in the neighbouring village of Manhush. He called it an act of provocation by the authorities which they carried out with the help of "pocket stormtroopers".

"The authorities brought around 50 militants in balaclavas to ruin my meeting with people. Youngsters were aggressive. Before the meeting, they seized the culture centre. They pushed people out. Police were idle," he said.