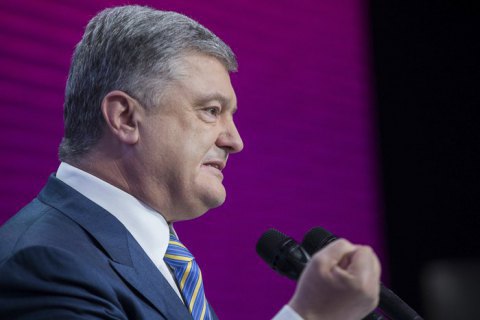 He made this statement at a meeting with researchers at the Ukrainian Catholic University in Lviv on Monday, 29 April.

The president also stressed that he would not allow anyone to buy Ukraine for gas.

“Because the main thing that they are now trying to offer is cheaper gas for Ukraine,” he said.

Earlier, Russian President Vladimir Putin once again called Ukrainians and Russians one people and stated the need for common citizenship. He was commenting on Russia's plans to issue passports to citizens of Ukraine and the reaction to this by Ukrainian presidential election winner Volodymyr Zelenskyy.

"If anyone makes any decisions in favour of Ukraine, we will support them. If anyone needs advice, we will give it. But the risks facing the world and Ukraine are overwhelming," the president noted.

He added: "If you go to meet with Putin, nobody from the world coalition, which we’ve been carefully creating for five years, will come to you anymore. You will destroy it. And leave Ukraine alone with the aggressor. And then you will only have to kneel down and admit the capitulation."

"And this is precisely what we cannot allow," he said.